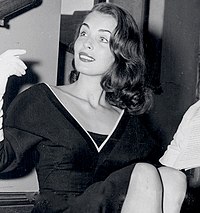 Rosemarie Bowe Stack (born Rose Marie Bowe; September 17, 1932 – January 20, 2019) was an American model and actress. She was best known for her movie roles in the 1950s. She was born in Butte, Montana and raised in Tacoma, Washington.

Bowe was married to actor Robert Stack from 1956 until his death in 2003. She was known for her role in The Adventures of Hajji Baba. She also starred in John Cassavetes' Big Trouble (1986).

In October 1969, Bowe was in a car accident in Sacramento, California, and had serious internal injuries. She crashed into a concrete culvert. Kathleen Lund, the wife of Art Lund was killed in the accident.[1] Art Lund filed a $750,000 wrongful death suit, saying Stack was driving at an "excessive speed" during the accident.[2]