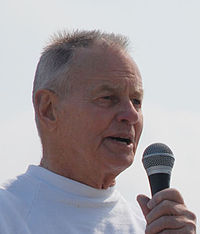 Rudolph Ernst Boesch (January 20, 1928 – November 1, 2019) was a United States Navy SEAL and television personality. He was a two-time competitor on the reality competition show Survivor. He was born in Rochester, New York. Boesch hosted the television show Combat Missions in 2002.

Boesch died of Alzheimer's disease-related problems on November 1, 2019 at a retirement home in Virginia Beach, Virginia at the age of 91..[1][2]