Rugby union is a ball sport. Two teams of 15 players play against each other. The ball used is oval in shape. The field is a rectangle shape. It is 100 metres long and 70 meters wide. At the ends of the field are two H-shaped goal-posts which you have to score next to or underneath.

The game is played for 80 minutes in two 40-minute halves but there is an overtime if it goes on long enough.

A try is scored when a player 'scores'. A try is worth 5 points. To score a try the player must put down the ball in the 'try area'. The try area is behind the goal-posts.

Once a try has been scored, the team has a chance to score extra points. The goal kicker kicks the ball towards the goal-posts. The ball must pass between the two upright goal-posts and above the cross-piece. If it does, the team is awarded 2 additional points. This act is known as a 'conversion'.

Another method of scoring points is through penalties. When a team breaks the rules, the referee may award a penalty. The goal-kicker kicks towards the goal-posts. The ball must pass between the two upright goal-posts and above the cross-piece. If it does, the team is awarded 3 points and at the end all the points add up and the team with the most points is the winner.

During play, the goal-kicker can also attempt a 'drop-goal'. The goal-kicker kicks towards the goal-posts. The ball must pass between the two upright goal-posts and above the cross-piece. If it does, the team is awarded 3 points.

A scrum is when the two teams push together. If you are in the scrum you are a prop, hooker, flanker, second row, or 8-man.

The players in the back positions are usually smaller, faster and more skilful at kicking and passing. If you are a prop or a hooker you need to be heavy and strong as you play in the front row if there is a scrum. Flankers and locks are often tall and powerful and are used to win the ball in a lineout. 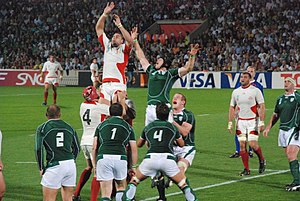 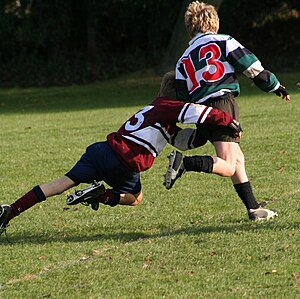 A rugby tackle: tackles must be low down on the body, with the aim of impeding or grounding the player with the ball

The laws of Rugby Union whilst difficult at first are easy to pick up.

The key rule to rugby union play is that the person who is carrying the ball at any time cannot pass the ball to a teammate who is closer to the opposition goal line. The ball must always be passed sideways or backwards.

During the game there are between one and four people who watch that the rules of the game are met. The most important of these four is the referee who runs alongside players as they play the game. The referee controls the game.

The two touch-judges patrol the out-of-bounds areas. They also decide when a goal kick has been successful.

The TMO, or 'television match official', helps the referee with difficult decisions. Most professional games have a TMO.

Kicking is very important part of the rugby game. Normally, it is the back players who kick. However, you will sometimes see the forwards kick. There are different reasons why they may kick: to score points by making a drop goal, to place the ball further towards the other team's try line, or to gain distance by kicking the ball high into the air for a team mate to chase and catch.