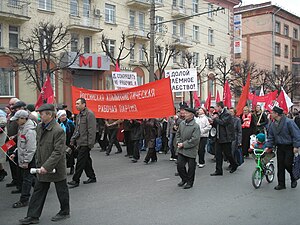 The Communist Workers Party of Russia - Revolutionary Party of Communists (RCWP-RPC) (Russian: Российская Коммунистическая Рабочая Партия – Революционная Партия Коммунистов)is a Communist political party in Russia. The party was created in October 2001, wanting to bring Communism and the Soviet Union back.