Russia (Russian: Россия), officially called the Russian Federation (Russian: Российская Федерация)[11] is a country that is in Eastern Europe and in North Asia. It is the largest country in the world by land area. About 146.7 million people live in Russia according to the 2019 census. The capital city of Russia is Moscow, and the official language is Russian.

Russia shares land borders with Norway, Finland, Estonia, Latvia, Lithuania and Poland (both via Kaliningrad Oblast), Belarus, Ukraine, Georgia, Azerbaijan, Kazakhstan, China, Mongolia, and North Korea. It also has borders over water with Japan by the Sea of Okhotsk, and the United States by the Bering Strait.

Russia is a very large and diverse country. From 1923 to 1991, it used to be the main part of the Soviet Union. It was a country based on Communism, but today its government is a federal semi-presidential republic. It has elements of democracy. The President is chosen by direct election, but challenging candidates do not have access to the mass media, and so have almost no chance of winning.[12] Its current President is Vladimir Putin. The President rules the country, and the Russian Parliament plays a secondary role.

Russia has 85 regional parliaments, and the presidents of these areas are very rarely ever displaced in an election. As a typical example, Kirsan Ilyumzhinov was President of the Republic of Kalmykia in the Russian Federation from 1993 to 2010. Such a long tenure is not unusual in Russia, and suggests that the electoral system is heavily biased to keep incumbents in power.[13]

At 17,075,400 square kilometres (6,592,800 sq mi), Russia is the largest country in the world, covering more than one-eighth of the Earth's inhabited land area. Russia is also the world's eighth most populous nation with 143 million people as of 2012. Russia produces a lot of energy made from oil and natural gas.[14]

At the end of the twentieth century, Russia experienced many political changes. Some people fought to leave from the federation.

Elections are held at all levels. According Steve White, the present government made it clear that they had no plans of making a "second edition" of the American or British political system, but rather a system that was closer to Russia's own traditions.[22] Richard Sakwa wrote that the Russian government is considered legitimate by the majority of the Russian people. It seeks to deliver a set of public goods without trying to fit to extra-democratic logic to achieve them. Whether the system is becoming less autocratic (dictatorial) is debatable.[23]

The roots of Russia's history began when the East Slavs formed a group in Europe between the 3rd and 8th centuries AD.[24] The Vikings and their descendants founded the first East Slavic state of Kievan Rus' in the 9th century. They adopted Christianity from the Byzantine Empire in 988.[25] This form of Christianity influenced Russian culture greatly.[25] Kievan Rus' eventually broke up and the lands were divided into many small feudal states. The most powerful successor state to Kievan Rus' was the Grand Duchy of Moscow. This area served as the main force in later Russian unification and the fight against the Golden Horde from Asia. Moscow slowly gained control of the regions around it and took over the cultural and political life of Kievan Rus'.

In the 18th century, the nation had expanded through conquest, annexation and exploration to become the Russian Empire, the third largest empire in history. It stretched from the Polish-Lithuanian Commonwealth eastward to the Pacific Ocean and Alaska. The empire was ruled by an emperor called the Tsar.

Boris Yeltsin was made the President of Russia in June 1991, in the first direct presidential election in Russian history. Wide-ranging reforms took place, including privatization and free trade laws.[26] Radical changes "(shock therapy) were recommended by the United States and International Monetary Fund.[27] A major economic crisis followed. There was 50% decline in GDP and industrial output between 1990–95.[26][28]

The privatization largely shifted control of enterprises from state agencies to individuals with inside connections in the government system. Many of the newly rich business people took billions in cash and assets outside of the country .[29] The depression of state and economy led to the collapse of social services. Millions went into poverty, from 1.5% level of poverty in the late Soviet era, to 39–49% by mid-1993.[30] The 1990s saw extreme corruption and lawlessness, rise of criminal gangs and violent crime.[31]

Russia took responsibility for settling the USSR's external debts, even though its population made up just half of the population of the USSR at the time of its dissolution.[32] High budget deficits caused the 1998 Russian financial crisis[33] and resulted in further GDP decline.[26]

High oil prices and initially weak currency followed by increasing domestic demand, consumption and investments has helped the economy grow for nine straight years. This improved the standard of living and increasing Russia's influence on the world stage. While many reforms made during the Putin presidency have been criticized by Western nations as un-democratic,[34] Putin's leadership led to stability, and progress. This won him widespread popularity in Russia.[35] 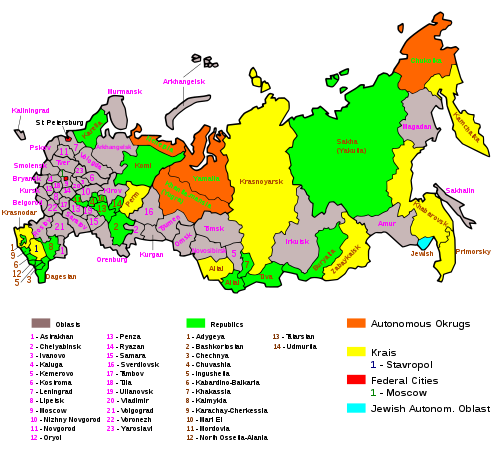 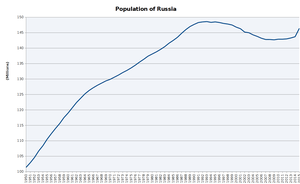 Russia's area is about 17 million square kilometers (6.5 million sq. mi.). It is the largest country in the world.[36] Its population density is about 8.3 people per square kilometer (21.5 per sq. mi.). This is among the lowest country densities in the world. The population is most dense in the European part of the country, centering around Moscow and Saint Petersburg. Siberia has a very low density. 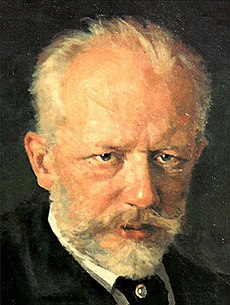 Russian composer Tchaikovsky created famous ballets such as The Nutcracker. The impressario Sergei Diaghilev was responsible for the development of ballet in the early 20th century with the Ballets Russes. Dance companies at the Mariinsky Theatre and the Bolshoi Ballet produced many famous dancers.[37]

Russians have contributed many famous works of literature.[38] Alexander Pushkin is considered a founder of modern Russian literature. He was a poet from the 19th century.[39]

Other famous poets and writers of the 19th century were Anton Chekhov, Mikhail Lermontov, Leo Tolstoy, Nikolai Gogol (he was born in what is now Ukraine, but during his lifetime Ukraine was a part of Russia), Ivan Turgenev and Fyodor Dostoyevsky. Tolstoy and Dostoyevsky are considered by many people to be two of the greatest novelists ever.[40][41] Three Russians won the Nobel Prize for Literature in the 20th century: Boris Pasternak (1958), Mikhail Sholokhov (1965) and Aleksandr Solzhenitsyn (1980). Mikhail Bulgakov's The Master and Margarita was also a novel of the highest quality.

Soccer, ice hockey and basketball are among the most popular sports. Boxing, gymnastics, weightlifting, and tennis are also popular sports. Track suits are popular clothing items for many Russians. Sports people to gain world fame include former tennis world number one Maria Sharapova, who has won three Grand Slam titles, and was the world's highest paid female athlete in 2008.[42]

For the 2018 Winter Olympics which were held in Pyeongchang, South Korea, a lot of athletes could not compete because the International Olympic Committee found out they had been doping. Those who were not caught doping were able to play in the 2018 Olympics under the title of "Olympic Athletes from Russia", and they took home two gold medals, including one in ice hockey.[43][44] 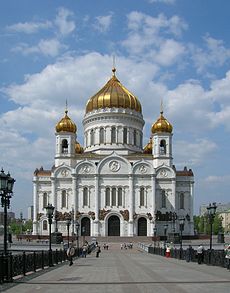 Cathedral of Christ the Saviour, demolished during the Soviet period, was reconstructed from 1990–2000.