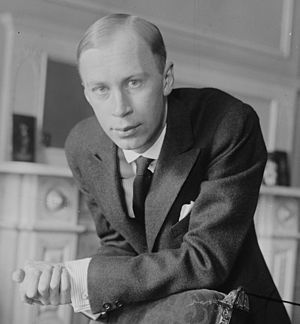 Sergei Prokofiev in New York in 1918

Sergei Sergeyevich Prokofiev (Ukrainian: Сергій Сергійович Прокоф'єв) (born Sontsovka, Ukraine 23 April 1891; died Moscow 5 March 1953) was a Russian composer and pianist who came from Ukraine. During his lifetime, Ukraine was part of Russia. Together with Dmitri Shostakovich he is one of the greatest Russian composers of the 20th century. Children all over the world love to listen to his musical story Peter and the Wolf and the music for Lieutenant Kije, but he wrote many other great works including symphonies, concertos, piano sonatas, ballets and operas.

Prokofiev was born into an educated family, and his mother recognized very early her son's musical gifts. His father was a college-educated agronomist who managed the farm-site of his employer in the Ukrainian steppe. His mother played the piano reasonably well in her son's opinion. The young Sergei started composing at a very early age. By the time he was eleven he had written two operas and a series of small piano pieces he would later call "little puppies". Soon he was writing music with unusual time signatures and in unusual changes of key.

Prokofiev's formal musical education began when, as a young boy, he started taking lessons from Reinhold Glière. In 1904 he went to study at the Conservatory in St Petersburg. He was a brilliant student, but he often disagreed with the way the professors were teaching. He was bored with the lessons in orchestration from Rimsky-Korsakov and the counterpoint lessons from Liadov although he could have learned more from these great men. His main friends were the composers Nikolai Myaskovsky and Boris Asafiev. He often showed them his latest piano compositions which sounded very modern. Many of St. Petersburg's newspaper critics did not like his music, while others felt he showed great promise and was sure to be a "futurist".

Prokofiev spent the summer of 1909 back at home in the small Russian farming village of Sontsovka in what is now Ukraine where his father was an estate manager. He worked in a way that was to be typical of him all his life: he carefully kept a diary until the middle 1930s, was an excellent chess player and writer, kept making changes to a number of his earlier works. He often borrowed music from one composition and put it in another, or used unfinished works in new compositions.

When he returned to St Petersburg he took piano lessons from a teacher at the St. Petersburg Conservatory called Anna Esipova. She worked hard to discipline him in his playing although he did not appreciate her efforts. He also took conducting lessons from Nikolai Tcherepnin who taught him to like late-Romantic composers such as Scriabin and Debussy. He wrote some music himself in this style, but most of the music he wrote at this time sounded very harsh and dissonant and, although he was becoming quite famous, many people hated it. When he finished his studies at the Conservatoire he won its top prize (the Rubinstein Prize) with his First Piano Concerto, although the examiners had found it hard to agree and Rimsky-Korsakov said that Prokofiev was "gifted but immature".

Prokofiev travelled to London where he met many famous people including Diaghilev who had a very skilled ballet group called Ballets Russes. The composer Igor Stravinsky had been writing ballet music for Diaghilev’s dancers. Prokofiev particularly loved Stravinsky’s Rite of Spring and it influenced his music. He wrote an opera The Gambler based on the novel by Brusilov but the singers and the orchestra did not understand his music and refused to perform it. One of the first works of Prokofiev to become known all over the world was his First Symphony known as the Classical Symphony. He made the music sound like that of composers from the Classical period such as Haydn. This symphony is still very popular today.

He composed the music in peter and the wolf

In 1917 the Russian Revolution took place. The country was in a chaotic state so Prokofiev went to the United States. After a journey which took four months via the Transsiberian railway, Tokyo and San Francisco, he arrived in New York. His first real success came from his connections with Cyrus McCormik in Chicago. His first major commission was the opera The Love for Three Oranges for the Chicago Lyric Opera. It was popular in Chicago but not in New York City where he really wanted to make his reputation. He soon traveled to Paris to see Diagalev again whom he had met earlier in London. His first ballet for him was Ala and Lolly which Diagalev did not like and would not perform. This ballet later became Prokofiev's Scythian Suite. His next ballet was more successful, The Tale of the Buffoon. He also wrote his Third Piano Concerto which is his most popular concerto for piano. Prokofiev lived off and on in Paris for fourteen years, but he often went on tour, performing his works on the piano. In 1928 his Third Symphony was first performed, much of which was based on music from his opera The Fiery Angel which was never performed completely in his lifetime. In the late-1920s he was invited back to Russia. Although many Soviet people tried to persuade him to stay there he decided to remain in the West where he was starting to have a very successful career. It was not until 1936 that he finally decided to move back to Russia. Life was not easy in the Soviet Union for all types of creative people such as musicians, poets, writers and film makers. Composers were expected to write music which would make ordinary people happy and make them feel proud of their country and of the communist revolution. Any music that did not do this was called “decadent” or “formalist”. Many artists where punished for creating works that did not do what the socialist politicians expected of them. Prokofiev had never been interested in politics, and he thought the politicians would leave him in peace so that he could write the kind of music he liked.

Back in Russia Prokofiev settled in Moscow. He wrote several children’s pieces including Peter and the Wolf. He was asked to write music for two important jubilees: the 20th anniversary of the Revolution and the centenary of Pushkin’s death. He took great care over this music. Much of what he wrote was to be directed by Meyerhold, but Meyerhold was arrested, later tortured and murdered so the whole project never happened. Some of the music written for the Pushkin centenary was later used in his opera War and Peace, the Stone Flower ballet and Symphonic Waltzes. He also wrote a very large piece called Cantata for the Twentieth Anniversary of the October Revolution, using words by Marx, Lenin and Stalin for a total of 500 performers. The music included realistic effects such as gun shots, machine-gun fire and sirens. However, many critics said that the music was vulgar, and it was not performed until 1966, long after Prokofiev’s death. He tried to make the soviet authorities pleased by writing a "safe" opera called I am the Son of the Working People but the politicians stopped it during its early auditions. The opera was going to be produced by Meyerhold, but again it never happened because Meyerhold was arrested and executed.

The World War II was a time of change for Prokofiev for several reasons. In 1941 his marriage to Lina Llubera came to an end and his new companion Mira Mendelsohn, and later wife, saw him through his last years. Lina was a foreigner and marriage to foreigners was made illegal (forbidden) at that time. In 1948 she was arrested, charged with being a spy, and sent to a labour camp. On the other hand, Mira had lived her entire life within the Soviet system and was much more aware of how to survive in the politacally-charged times. In 1945, shortly after the premier of his Fifth Symphony, he had a stroke which was the beginning of a period of bad health. He spent a lot of time away from Moscow where it was unsafe. The first signs that his health was to be poor occurred in Alma-Ata in 1943 when he had a fainting spell. He was an workaholic and this, plus the pressures placed upon him by the Soviet system, forced him to withdraw from an active social life in Moscow. Prokofiev lived with Mira for the rest of his life. Lina was freed from the labour camp after Stalin’s death. Later she left the Soviet Union and she died in London in 1989.

During the war Prokofiev composed a lot of his best music. He wrote his last piano sonatas as well as working on his operas Betrothal in a Monestary after Sherican, and War and Peace (based on the novel by Tolstoy) and writing his film music for both Eisenstein’s Alexander Nevsky and Ivan the Terrible and composing his Fifth Symphony. The first performance of this symphony, given on 13 January 1945, was the last time he conducted in public. He spent the rest of his life in a house in the country to the west of Moscow, although during his last winters he lived in Moscow close to his doctors. Even in these last years he was not to find peace. Stalin’s rule of terror had serious effects on all Soviet artists. In 1948 a committee of the Communist Party spoke out against several Soviet composers including Prokofiev. They said that his music was “formalist” and “alien” to the Soviet people. His opera “War and Peace” was not allowed to be performed because it was neither lyrical nor patriotic enough. The works he wrote in his last years were mostly ones which the politicians officially approved. His last great work of this period is the Symphony-Concerto for cello and orchestra which used a lot of music from the unsuccessful Cello Sonata, and greatly revised with the help of the cellist Mstislav Rostropovich.

Prokofiev died of a brain haemorrhage on 5 March 1953. His death was hardly mentioned in the newspapers because the dictator Josef Stalin died on the same day.