Saint Petersburg (Russian: Санкт-Петербу́ргLua error in package.lua at line 80: module 'Module:Category handler/data' not found.) is a Russian city in northwestern Russia, near the Gulf of Finland of the Baltic Sea. Over five million people live in St. Petersburg as of 2015, and it is the second biggest city in Russia. It is a major port, connecting with the world's shipping paths through the Neva River and the Baltic. 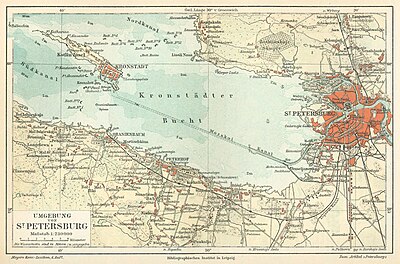 Saint Petersburg is located in Northwestern Federal district of Russia. The area of the city is 605.8 km². Saint Petersburg has an area called Leningrad oblast. The city has also many islands such as Vasilyevsky Island, Kotlin Island, Kamerny Island, Aptekarsky Island etc.

The climate is a humid continental.