Lenin (info • help) (22 April 1870 – 21 January 1924) was a Russian lawyer, revolutionary, the leader of the Bolshevik party and of the October Revolution. He was the first leader of the USSR and the government that took over Russia in 1917. Lenin's ideas became known as Leninism.

Lenin was born on 22 April 1870 in the town of Simbirsk in the Russian Empire. His mother was a schoolteacher and his father was an education official (technically, his father's job made him and his family noblemen).

Lenin began studying politics in high school. Lenin was good in school and learned the Latin and Greek languages. In 1887, he was thrown out of Kazan State University because he protested against the Tsar who was the king of the Russian Empire. He continued to read books and study ideas by himself, and in 1891 he got a license to become a lawyer.

In the same year that Lenin was expelled from University, his brother Alexander was hanged for his part in a bomb plot to kill Tsar Alexander III, and their sister Anna was sent to Tatarstan. This made Lenin furious, and he promised to get revenge for his brother's death. 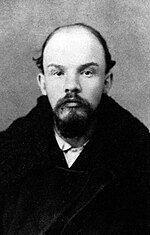 Picture taken when Lenin was arrested

While he studied law in St. Petersburg he learned about the writings of Karl Marx and Friedrich Engels, who were both philosophers from Germany. Karl Marx's thoughts were called Marxism. To talk or write about Marxism like it was a good thing was illegal in Russia, and Lenin was arrested for that and sent to prison in Siberia. This punishment was harsh because Siberia is known for being very cold and isolated, and almost impossible to escape.

In July 1898, when he was still in Siberia, Lenin married Nadezhda Krupskaya. In 1899 he wrote a book he called The Development of Capitalism in Russia. In 1900, Lenin was set free from prison and allowed to go back home. He then traveled around Europe. He began to publish a Marxist newspaper called Iskra, the Russian word for "spark" or "lightning". He also became an important member of the Russian Social Democratic Labour Party, or RSDLP.

In 1903, Lenin had a major argument with another leader of the party, Julius Martov, which divided the party in two. Lenin wanted to establish socialism right away, rather than establishing capitalism first and then making the transition to socialism. Martov disagreed, he wanted to cling to the Classical Marxist idea that in order to achieve socialism, you must go through capitalism first. People who agreed with Martov were called Mensheviks (meaning "the minority"). The people who agreed with Lenin were called Bolsheviks ("the majority").

In 1907 he traveled around Europe again, and visited many socialist meetings and events. During World War I he lived in big European cities like London, Paris and Geneva. At the beginning of the war, a big left-wing meeting called the Second International included the Bolsheviks. The meeting shut down when a lot of the groups argued whether or not to support the war. Lenin and the Bolsheviks were one of only a few groups who were against the war because of their Marxist ideas.

After Tsar Nicholas II gave up his throne during the February Revolution, Lenin went back to Russia where he was still a very important Bolshevik leader. He wrote that he wanted a revolution by ordinary workers to overthrow the government that had replaced Nicholas II.

In 1917, The Kadets, a right-wing party, and elements of the Okhrana (secret police) started rumors that Lenin had got money from the Germans, because they had sent him through Germany in a special train to reach Russia. That may have made him look bad because a lot of Russians had died fighting Germany in the war. After the July Days, a popular uprising in Petrograd which was crushed by the Russian Provisional Government, he left Russia and went to Finland, where he could hide and carry on with his work on Communism.

In October 1917, the Bolsheviks, led by Lenin and Trotsky, headed the Petrograd Soviet and other Soviets all over Russia in a revolution against Kerensky's government, which was known as the October Revolution. They won, and announced that Russia was a socialist country. In November, Lenin was chosen as its leader. 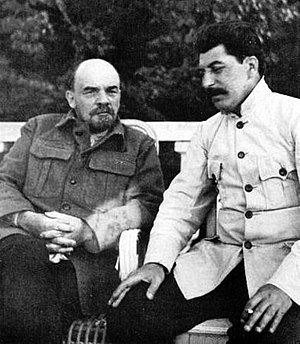 Vladimir Lenin (left) with Joseph Stalin
Because Lenin wanted an end to World War I in Russia, he signed the Treaty of Brest-Litovsk with Germany in February 1918. While the treaty ended the attack by Germany, Russia lost a large amount of land that it used for farming.

The treaty also made Germany's other enemies angry, and together with Russian people who supported the Tsar or Kerensky's government, they attacked Russia. Lenin made rules that as much food as possible was to be given to Bolshevik soldiers in Russia's new Red Army. This meant that they won the war, but ordinary people were starving, and many died of hunger or disease.

After the war, Lenin brought in the New Economic Policy to try and make things better for the country and move from capitalism towards socialism. Some private enterprise was still allowed, but not much. Businessmen, known as nepmen, could only own small industries, not factories. Factories and large industry became public property to be owned by the workers.

One of the last photographs of Lenin: 1923

A woman named Fanny Kaplan shot Lenin whilst he was making an official visit. She missed his head and instead the bullet was lodged into his neck. Fearing that he would be killed by political dissenters, he refused to have the bullet removed until a guaranteed Communist doctor could be found. As a result of his direct refusal to be treated, the bullet was never removed, and is often cited as the reason he started having strokes in May and December 1922 (both of which he recovered from). In March 1923 a stroke paralyzed him and left him unable to speak, and in January 1924 a stroke killed him. Just before he died, Lenin had wanted to get rid of Stalin because he thought he was dangerous to the country and the government.

The city of St. Petersburg had been renamed Petrograd by the Tsar in 1914, but was renamed Leningrad in memory of Lenin in 1924. When the Soviet Union collapsed in 1991 Leningrad was again named St. Petersburg, which it remains to this day.

Before Lenin died, he said he wished to be buried beside his mother. When he died, Stalin let the people in Russia look at his body. Because people kept coming they decided not to bury him, and preserved his body instead. A building was built in Red Square, Moscow over the body so that people could see it. It is called the Lenin Mausoleum. Many Russians and tourists still go there to see his body today.