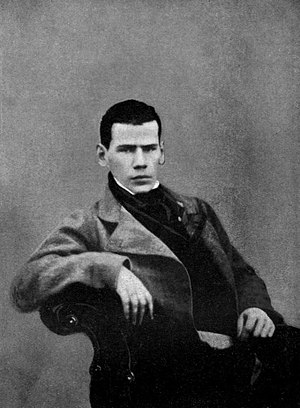 Count Lev Nikolayevich Tolstoy (9 September 1828 – 20 November 1910) was a Russian novelist and anarchist, famous for writing the books War and Peace and Anna Karenina, and many other works. He was a Christian and believed in non-violence and practiced simple living. His work The Kingdom of God is within you has influenced people like Mahatma Gandhi and Martin Luther King.

Tolstoy was born at Yasnaya Polyana, the family estate in the region of Tula, Russia and he married Sofia Andreevna Bers.

When he was young his parents died, so he and his siblings were brought up by relatives. At the age of 16, he began studying law and oriental languages. Unfortunately, he left University in the middle of his studies and spent much of his time in Moscow and Saint Petersburg. Later on in his life, he joined the Army with his brother after running up some heavy gambling debts. It was at that time that he started writing.

His conversion from a wealthy society author to the non-violent and spiritual anarchist of his later days was notable. It was caused by his experience in the army as well as two trips around Europe in 1857 and 1860–61. Others who followed a similar path were Alexander Herzen, Mikhail Bakunin and Peter Kropotkin. During his 1857 visit, Tolstoy saw a public execution in Paris, an experience which marked the rest of his life.

After Anna Karenina, Tolstoy concentrated on Christian themes, and his later novels such as The Death of Ivan Ilyich (1886) and What Is to Be Done? (1886) develop a radical Christian philosophy which led to his excommunication from the Russian Orthodox Church in 1901.[1]

After shaping both his political and literary development in Europe, he returned to Russia and founded 13 schools for Russia's peasant children.[2]