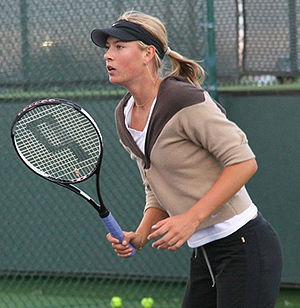 Maria Sharapova (born 19 April 1987) is a Russian tennis player. She was born in Nyagan, Western Siberia, RSFSR. Her parents had moved from Belarus to protect themselves from the Chernobyl nuclear accident.[1] The Sharapov1 family moved again in 1989, when Maria became interested in tennis, when watching her father play, and played tennis with a second-hand racquet. She would practice tennis by hitting the tennis ball against the wall every day, and her dad soon noticed that she was very good at the sport.[2] Maria's tennis coaches told the Sharapovs that they should move to Moscow,[3] Russia, to get better training. The Sharapovs moved again, from Moscow, to follow Maria's coach, Martina Navratilova's advice, to move to the United States.

There was a problem, though. Sharapova's mother, Yelena, could not get a visa to go to the United States.[4] Meanwhile, Maria and her father tried to get Maria to go to a famous sports school, and they also had to learn English. Maria showed so much talent that soon, she got a full scholarship to attend the school. At first though, Maria's dad had to pay for Maria to stay at the famous school, doing all sorts of jobs so that they could be able to pay for the school.

Sharapova trained harder and harder. She was videotaped when practicing, and her every move was recorded. Then, she would watch the videos with her coaches to watch her form, emotions, and expressions.

She began to win tournaments and many people started to notice her. Her games improved, and Maria gained more fans.

In March 2016, Sharapova revealed she had failed a drug test at the 2016 Australian Open, admitting to testing positive for meldonium, a substance banned by the World Anti-Doping Agency (WADA) at the start of 2016. On June 8, 2016, she was suspended from playing tennis for two years by the International Tennis Federation (ITF).[5][6][7]

1In Russia, female surnames are changed so that their gender can be identified, so Sharapov becomes Sharapova.