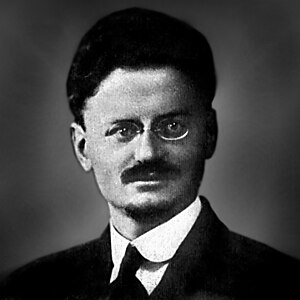 Leon Davidovich Trotsky (info • help) (Russian: Лев Давидович Троцкий; also transliterated Leo, Lev, Trotskii, Trotski, Trotskij and Trotzky; October 26 (O.S.) = November 7 (N.S.), 1879 in Kropyvnytskyi (nowadays Ukraine) - August 21, 1940 in Coyoacán, Mexico) was the public name of Leib or Lev Davidovich Bronstein. He was a Russian revolutionary and political theoretician. He was of Jewish-Ukrainian descent.[1] After leading the Red Army in the Russian Civil War he disagreed with other Bolsheviks and had to leave Russia.

After the revolution Trotsky left Russia for his own safety. In 1917, he returned to Russia because of the Russian Revolution. He helped to bring about communism in Russia and defend it during the Russian Civil War. He was in charge of the army at this time. When the leader of the Bolsheviks (the party who led the revolution) Vladimir Lenin died, Trotsky became involved in a power struggle with Joseph Stalin for the leadership of the party. He lost, and Stalin came to power. He had to leave Russia because of Stalin, who was now his own enemy and wanted to harm Trotsky. In 1938 Trotsky founded the Fourth International. Stalin had one of his spies, Spaniard Ramón Mercarder, stab Trotsky to death in Mexico in 1940.

People who believe in Trotsky's ideas are called Trotskyists and follow Trotskyism. The main Trotskyist organizations today are the Fourth International (post - Reunification), the Socialist Workers Party in the UK and the International Socialist Tendency.