Bobby Fischer at the Leipzig Chess Olympiad in 1960 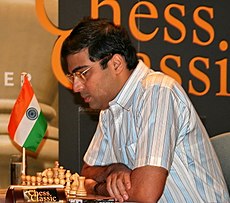 Before 1886, there was no official championship held, but some players were thought to be pre-eminent. From 1948 on, the World Chess Federation FIDE held the championships. Between 1993 and 2006 there were two world champion titles, the FIDE one and the classical one.

The 2013 World Championship match took place between Anand and Magnus Carlsen (challenger) in Chennai, the capital of Tamil Nadu, where Anand grew up. Usually, world championships had been played on neutral ground. Fischer played Spassky in Iceland; Alekhine played Capablanca in Buenos Aires. The Soviets always played in Moscow. However, sponsorship is needed for these matches, and the decision to accept the Chennai bid was taken by FIDE. The Challenger was victorious winning 3 games and achieving the necessary 6.5 points to win the title at the end of game 10. Magnus Carlsen, 22 and from Norway is therefore the current World Chess Champion.

These players are included (pre-18th century) on little more than opinion, and (18th century) on the basis of more substantial information.[1] Some authors of important early works on chess are noted.

These players are included on the basis of their winning matches against credible opponents. Champions are numbered from Steinitz onwards, because his match against Zukertort was publicly declared as a world championship, and generally accepted.[3][4]