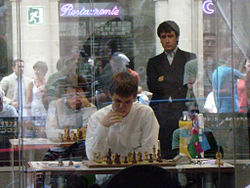 Teimour Radjabov watching his rival Magnus Carlsen from a distance.

On 1 January 2010, the new FIDE rating list was published. He was 19 years and 32 days old when he became the youngest chess player in history to be ranked world number one. He broke the previous record held by Vladimir Kramnik.[6][7]

In London, March 2013, Carlsen won the 2013 Candidates tournament and qualified to challenge Anand for the World Chess Championship.

When Carlsen became the fourth best player in the world he reached an agreement with a public relations (PR) expert in early 2009. This arrangement has borne fruit. Carlsen now has two sponsors, each of which provides 100,000 Euros a year. One is a stockbroker, the other a law firm. With this money, Carlsen is able to travel, and spend time on training. His coach is Garry Kasparov, a former World chess champion.[8]

In return for the sponsorship, Carlsen wears the names of the sponsors on his jackets. This is called 'logo exposure'. He attends meetings, and gives talks. His image helps the companies to hire 'high achievers' to their staff. Put simply, companies of that type are keen to hire intelligent people. Carlsen's overall business manager is his father, Henrik.[8]

Norway is going to hold the 2014 Chess Olympiad, and the Norwegian Government has pledged (promised) 70 million kroner (~8.5 million euros) in support of the event.[8]