Capablanca was a child prodigy with an astonishing natural talent for the game. He grew up into a cultured and charming man, whom the Cuban government made its roving ambassador-at-large. He was a media celebrity: his travels round the world were reported in newspapers, radio and movie newsreels. In his lifetime, he was probably the Cuban best-known to the rest of the world.[1][2][3][4]

In December 1921, shortly after becoming World Champion, Capablanca married Gloria Simoni Betancourt. They had a son, José Raúl Jr., in 1923 and a daughter, Gloria, in 1925.[5] According to Capablanca's second wife, Olga, his first marriage broke down fairly soon.[5][6]

José Raúl Capablanca was the second surviving son of an army officer.[7][8] According to Capablanca, he learned the rules of the game at the age of four by watching his father play, pointed out an illegal move by his father, and then beat his father twice. At the age of eight he was taken to Havana Chess Club, which had hosted many important contests, but on the advice of a doctor he was not allowed to play frequently.

Between November and December 1901, he narrowly beat the Cuban Chess Champion, Juan Corzo, in a match.[8][9][10] However, in April 1902 he only came fourth out of six in the National Championship, losing both his games against Corzo.[10] In 1905 Capablanca passed with ease the entrance examinations for Columbia University in New York City. He wished to play for Columbia's strong baseball team, and soon was selected as shortstop on the freshman team.[9] In the same year he joined the Manhattan Chess Club, and was soon recognized as the club's strongest player.[8] He was particularly dominant in rapid chess, winning a tournament ahead of the reigning World Chess Champion, Emanuel Lasker, in 1906.[8] In 1908 he left the university to concentrate on chess.[8][9]

The San Sebastian tournament of 1911 was "one of the strongest five tournaments held up to that time", as all the world's leading players competed except the World Champion, Lasker, who was inactive in serious play at the time.[11] At the beginning of the tournament, Ossip Bernstein and Aron Nimzowitsch objected to Capablanca's presence because he had not fulfilled the entry condition of winning at least third prize in two master tournaments.[8] Capablanca won brilliantly against Bernstein in the very first round, and more simply against Nimzowitsch. He astounded the chess world by taking first place, with a score of six wins, one loss and seven draws, ahead of Akiba Rubinstein, Milan Vidmar, Frank Marshall, Carl Schlechter and Siegbert Tarrasch.[8] His loss, against Rubinstein, was one of the most brilliant achievements of the latter's career.[12] Capablanca was now recognized as a serious contender for the world championship.[5]p33

In 1911, Capablanca challenged Emanuel Lasker for the World Chess Championship. Lasker accepted his challenge while proposing seventeen conditions for the match. Capablanca objected to some of the conditions, which significantly favored Lasker, and the match did not take place.[11]p67[13]

In September 1913, Capablanca secured a job in the Cuban Foreign Office,[8] which made him financially secure throughout his life. "He had no specific duties, but was expected to act as a kind of ambassador-at-large, a well-known figure who would put Cuba on the map wherever he travelled".[11]p58

The St. Petersburg 1914 chess tournament was the first in which Capablanca played World Champion Emanuel Lasker under normal tournament conditions. The St. Petersburg event was arranged in an unusual way: after a preliminary single-round all-play-all tournament of eleven players, the top five were to play a second stage in a double round format, with scores from the preliminary tournament carried forward to the second contest.[14] Capablanca placed first in the preliminary tournament, 1½ points ahead of Lasker, who was out of practice and made a shaky start. Despite a determined effort by Lasker, Capablanca still seemed on course for ultimate victory. However, in their second game of the final, Lasker reduced Capablanca to a helpless position and Capablanca was so shaken by this that he blundered away his next game to Tarrasch. Lasker thus finished half a point ahead of Capablanca and 3½ ahead of Alekhine.[8][15] Alekhine commented:

"His real, incomparable gifts first began to make themselves known at the time of St. Petersburg 1914, when I too came to know him personally. Neither before nor afterwards have I seen – and I cannot imagine as well – such a flabbergasting quickness of chess comprehension as that possessed by the Capablanca of that epoch. Enough to say that he gave all the St. Petersburg masters the odds of 5–1 in quick games – and won! With all this he was always good-humoured, the darling of the ladies, and enjoyed wonderful good health – really a dazzling appearance. That he came second to Lasker must be entirely ascribed to his youthful levity – he was already playing as well as Lasker".[16]

After the breakdown of his attempt to negotiate a title match in 1911, Capablanca drafted rules for the conduct of future challenges, which were agreed by the other top players at the 1914 Saint Petersburg tournament, including Lasker, and approved at the Mannheim Congress later that year. The main points were: the champion must be prepared to defend his title once a year; the match should be won by the first player to win six or eight games, whichever the champion preferred; and the stake should be at least £1,000 (worth about £347,000 or $700,000 in 2006 terms).[13][17] 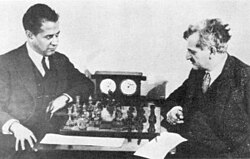 In January 1920, Emanuel Lasker and Capablanca signed an agreement to play a World Championship match in 1921. The match was played in March–April 1921; Lasker resigned it after just fourteen games, having lost four games and won none. Vladimir Kramnik thought that Lasker played quite well and the match was an "even and fascinating fight" until Lasker blundered in the last game. Kramnik's explanation was that Capablanca was twenty years younger, a slightly stronger player, and had more recent competitive practice.[18]

Capablanca came second at the New York 1924 tournament, 1½ points behind Emanuel Lasker, though two ahead of third-placed Alekhine, with the score of 14/20 (+10 -1 =9).[19] Capablanca's defeat at the hands of Richard Reti in the fifth round was his first in serious competition in eight years.[19] He made another bad start at the Moscow 1925 chess tournament,[14] and could only fight back to third place, two points behind Bogolyubov and ½ point behind Emanuel Lasker.[19]

A group of Argentinian businessmen, backed by a guarantee from the president of Argentina, promised the funds for a World Championship match between Capablanca and Alekhine in 1927.[20] In the New York 1927 chess tournament,[21][22] six of the world's strongest masters played each other four times, the others being Alekhine, Rudolf Spielmann, Milan Vidmar, Nimzovich and Marshall,[19] lacking Bogolyubov and Lasker. Before the tournament, Capablanca diffidently wrote that he had "more experience but less power" than in 1911, that he had peaked in 1919 and that some of his competitors had become stronger in the meantime.[14] In the event, he finished undefeated, winning the mini-matches with each of his rivals, 2½ points ahead of second-place Alekhine, and won the "best game" prize for a win over Spielmann.[19]

Since Capablanca had won the New York 1927 tournament overwhelmingly, and had never lost a game to Alekhine, he was regarded by most pundits as the clear favorite in their 1927 World Chess Championship match.[14] However, Alekhine won the match, played at Buenos Aires, by 6 wins, 3 losses, and 25 draws – the longest World Championship match until the World Chess Championship 1984–85 between Anatoly Karpov and Garry Kasparov.[23] Alekhine's victory surprised almost the entire chess world.

After Capablanca's death, Alekhine expressed surprise at his own victory, since in 1927 he had not thought he was superior to Capablanca, and he suggested that Capablanca had been over-confident.[16] Capablanca entered the match with no technical or physical preparation,[8][14] while Alekhine got himself into good physical condition,[24] and had thoroughly studied Capablanca's play.[25] According to Kasparov, Alekhine's research uncovered many small inaccuracies, which occurred because Capablanca was unwilling to concentrate intensely.[26] Vladimir Kramnik commented that this was the first contest in which Capablanca had no easy wins.[18] Luděk Pachman suggested that Capablanca, who was unused to losing games or to any other type of setback, became depressed over his unnecessary loss of the eleventh game, a long, gruelling endgame, featuring errors by both players.[27][28]

Immediately after winning the match, Alekhine announced that he was willing to give Capablanca a return match, on the same terms that Capablanca had required as champion – the challenger must provide a stake of US $10,000, of which more than half would go to the defending champion even if he was defeated.[29]

Negotiations for a return match dragged on for several years, often breaking down when agreement seemed in sight. Their relationship became bitter, and Alekhine demanded much higher appearance fees for tournaments in which Capablanca also played.[24][30]

Capablanca finished fourth, one  point behind the joint winners at Moscow in 1935;[19] Emanuel Lasker's third place at the age of 66 was widely admired. The following year, Capablanca won an even stronger tournament in Moscow, one point ahead of Botvinnik and 3½ ahead of Salo Flohr, who took third place;[19] A month later, he shared first place with Botvinnik at Nottingham, with a mark of (+5 -1 =8), losing only to Flohr; Alekhine came sixth.[19] These 1936 tournaments, the last of Lasker's life,[31] were the only ones in which Capablanca finished ahead of Lasker.

During these triumphs Capablanca began to experience debilitating symptoms of hypertension.[32] and could only finish seventh of the eight players at the 1938 AVRO tournament,[19] an élite contest designed to select a challenger for Alekhine's world title.[33][34] Capablanca's high blood pressure was not correctly diagnosed and treated until after the AVRO tournament, and caused him to lose his train of thought towards the end of playing sessions.[32]

Capablanca on other players: [1]