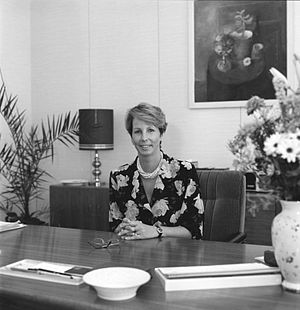 Sabine Bergmann-Pohl (born 20 April 1946) is a German conservative politician. She was the last head of state of East Germany from 5 April to 2 October 1990. On 3 October, East and West Germany were reunited.

She was born in Eisenach and studied medicine. She joined the CDU in 1981 and, after East Germany's only free elections, held in March 1990, became a member of the Volkskammer. On 5 April 1990 she became the President of the Volkskammer and, as the Council of State of the German Democratic Republic had been abolished, head of state of East Germany - the only woman to hold the post. She met with former United States President Ronald Reagan in East Berlin before reunification and said "Mr. President, we have much to thank you for."[1]

Upon reunification she was named a Minister Without Portfolio.[2] She was Federal Minister for Special Affairs from 1990 to 1991, and Under-Secretary of State for Health between 1991 and 1998. She also became a member of the Bundestag.

She retired from the Bundestag in September 2002. She is a Lutheran.[3]