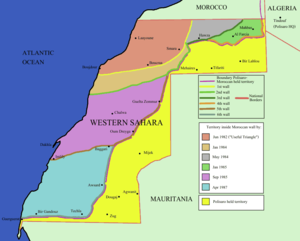 Image showing the Berm, the walls that separate POLISARIO-held territory in Western Sahara from Moroccan-held territory. The large yellow area is the Sahrawi Arab Democratic Republic

The Sahrawi Arab Democratic Republic (SADR) (Arabic: الجمهورية العربية الصحراوية الديمقراطية, Spanish: República Árabe Saharaui Democrática) is a partially recognized state that claims sovereignty over the entire territory of Western Sahara. SADR was proclaimed by the Polisario Front on February 27, 1976 in Bir Lehlu, Western Sahara. The SADR government currently controls between 20% and 25% of the territory it claims. It calls the territories under its control the Liberated Territories or Free Zone. Morocco controls and administers the rest of the disputed territory and calls these lands its Southern Provinces. The SADR government considers the Moroccan-held territory occupied territory, while Morocco considers the much smaller SADR held territory to be a buffer zone.

The United Nations calls all of the Western Sahara a dependency of Spain,[1]