Samuel Goldwyn (1879-1974) was a Polish-American movie producer who made a lot of movies in America.

He was born in Warsaw, Poland. His parents died when we was young. He first moved to London, then New York. In New York he worked in a glove factory, then as a glove salesman. After this, he helped his brother-in-law to make movies. 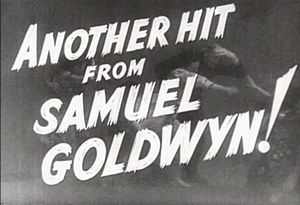 Trailer from one of Goldwyn's movies

He started the Goldwyn Pictures Corporation in 1917. This became part of Metro-Goldwyn-Mayer in 1924.

He often said things that people remembered, such as:

His sayings are called Goldwynisms.