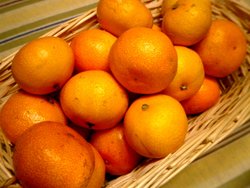 A basket of mikan

Satsuma[1] / sat-soo-muh/ .n. is a variety of tangerine with a loose skin. It is named after the former Satsuma Province of Japan. In the United Kingdom it is often associated with Christmas.