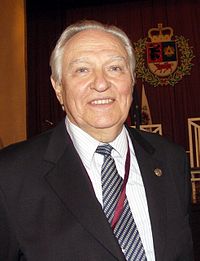 Saulius Sondeckis (11 October 1928 – 3 February 2016) was a Lithuanian violinist, conductor, orchestra leader and professor. He founded the Lithuanian Chamber Orchestra in 1960 and was its artistic director and principal conductor until 2004.[1]

Sondeckis was born in Šiauliai, Lithuania. He studied at Lithuanian Academy of Music and Theatre. Sondeckis died in Vilnius from a stroke on 3 February 2016. He was aged 87.