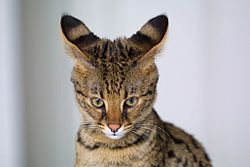 Close-up showing ocelli and tear-stain markings on a four-month old F1 Savannah. The F1 is the first generation (children) of a cross between a domestic cat and a serval

The Savannah cat is a breed of cat. It is the size of a medium dog. The breed is a combination of the serval and the domestic cat. It is a hybrid feline developed by crossing a domestic cat with a serval for a number of generations.

The bodies of Savannahs are long and leggy. When a Savannah is standing, its hind-end is often higher than its shoulders. The small head is taller than wide, and it has a long, slender neck.[1] The backs of the ears have vivid marking, very clear in the first illustration. This is inherited from the serval cat. In the wild this lets kittens know where the mother is heading. In grass the kits can jump up to get a sight of their mothers' ears. This is important because servals can cover a lot of territory very quickly.

Serval cats can jump over 9 feet high from a standing start.[2][3] Savannahs also jump high, but how high depends on the individual. They sometimes jump on top of doors, or onto shelves. They love the water. They have very few health issues. They make a hissing noise that sounds like a snake. Overall, they are active and intelligent.

The most serval-like cats are the F1 hybrids. Most later crosses are Savannah to Savannah. That, and outcrosses to other breeds, make the cats less distinctive: see second illustration.

These cats are not allowed in Hawaii, Alabama, and some other U.S. states. They are banned from Australia. The reasoning is that their extra size and capability might put even more of its precious native animals at risk.