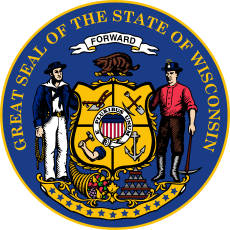 The State Seal of Wisconsin 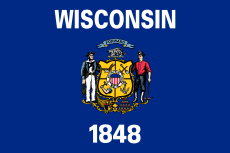 The seal has the words "Great Seal of the State of Wisconsin" at its top. At the bottom, it has a cornucopia alongside bars of lead, above 13 stars, one for each of the original 13 states. Also at the top is Forward, the state motto, and a badger. There are a sailor and a miner to represent mining and shipping, which were major industries when Wisconsin was established. On the four corners of the shield are a plough, a pick and shovel, an arm and hammer, and an anchor. In the center of the shield is the United States shield with the motto E Pluribus Unum.

The state flag features the state seal on a blue background.