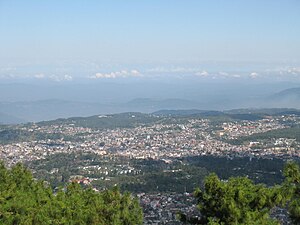 Shillong (Khasi: Shillong, Hindi: शिलांग) is a city in India. Shillong is the capital of Meghalaya. The East Khasi Hills district is in Shillong. In 2001, the city had a population of 260,520. Shillong is a major place in north-east India for education, because it has many schools and universities.

Khasis make up most of the population. However, the percentage of Khasi people is decreasing because many other people are moving there. People of all the other northeast Indian tribes live in Shillong. Many Bengali, Nepali, Assamese, Biharis and Marwaris also live there.

Christianity is the main religion in the city. Protestants make up 75% of the Christian population of Shillong and Catholics make up the remaining 25%. A lot of people in Shillong follow the original Khasi religion. There are also many other religions in the city.