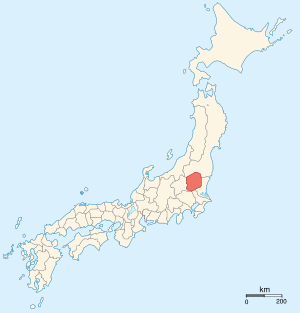 The ancient capital city of the province was near Tochigi.

Tokugawa Ieyasu's tomb and shrine is at Nikkō, in Shimotsuke.[2]

In the Nara period, Shimotsuke was part of Keno Province. This was changed in the reforms of the Taihō Code in 701.[3]

Parts of Shimotsuke were held by a several daimyo during the Sengoku period.

In the Meiji period, the provinces of Japan were converted into prefectures. Maps of Japan and Shimotsuke Province were reformed in the 1870s.[8]

Futarasan jinja was the chief Shinto shrine (ichinomiya) of Shimotsuke. [9]