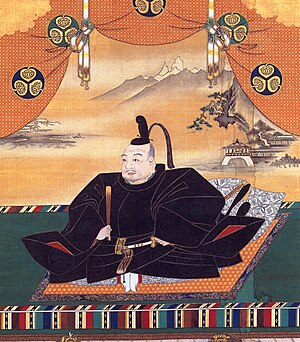 In this Japanese name, the family name is Tokugawa.

At birth, his name was Matsudaira Takechiyo.[1]

In 1562, he changed his name to Matsudaira Motoyasu. The second syllable -- -yasu -- comes from the name of his grandfather Kiyoyasu.[2] A few months later, he changed his first name to the one by which he is known today. The first syllable -- Ie- -- comes from the last part of the name of Minamoto Yoshile, who was a famous ancestor.[3] He received permission from the emperor to change his family name from Matsudaira to Tokugawa.[4]

Ieyasu was the first shogun of the Tokugawa shogunate.[1]

The hollyhock symbol of the Tokugawa family.