It was named in August 2003 after the giant Siarnaq (also known as Sedna) in Inuit mythology, it is the biggest member of the Inuit group of non-spherical moons. 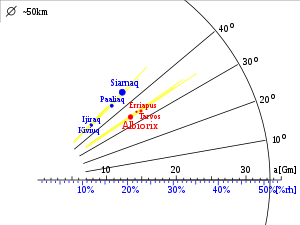 Siarnaq is thought to be about 40 kilometres in diameter and orbits Saturn at an average distance of 17,500,000 km in 895 days.

The diagram illustrates its orbit in relation to other prograde non-spherical moons of Saturn. The eccentricity of the orbits is represented by the yellow segments extending from the pericentre to the apocentre.

Siarnaq has light-red colours very similar to Paaliaq and Kiviuq, supporting that the moons formed during a break up of a bigger body.