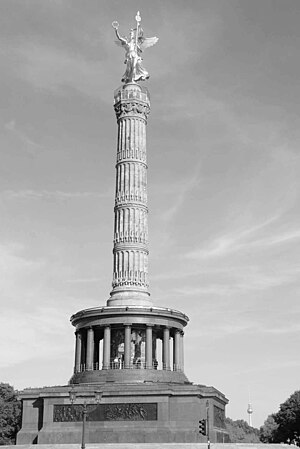 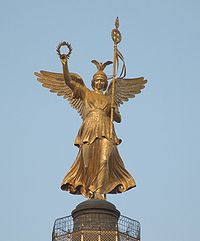 The Statue of Victoria

Siegessäule (info • help) or Victory Column is a famous sight in Berlin.

It was designed after 1864 to remember Prussia winning the Danish-Prussian war. By the time it was finished on 2 September 1873 Prussia had also beat Austria in the Austro-Prussian War (1866) and France in the Franco-Prussian War (1870/1871). A bronze sculpture of Victoria was added. Victoria was 8.3 m (27 ft) high and weighed 35 tonnes. Berliners like to give nicknames to famous buildings. They call the statue Goldelse, meaning something like "Golden Lizzy". She also has the nickname of "Chick on a Stick".

The column was built in the Königsplatz, now the Platz der Republik, in front of the Reichstag building. It had three blocks of sandstone decorated by cannons taken from the enemies in the three wars. In 1938 the column was moved to its present location, and a fourth ring, decorated with golden garlands was added.

Around the base are four bronze reliefs showing the three wars and the winning army marching into Berlin. They were made by four Berlin sculptors:

These reliefs were taken away in 1945. The French occupying army did not want to remind Germans about old victories. French president François Mitterrand returned the reliefs in time for Berlin's 750th anniversary of Berlin.

The monument is now on the Großer Stern (Great Star). Many roads meet here, so there are four tunnels under the roads to the monument, and it is possible to climb the steps inside the column and look out over Berlin. If the Nazis had not moved the column it would probably have been destroyed in World War II.

The column is in Wim Wenders' film Wings of Desire. In the film it is the place where angels meet. The golden statue on the column was in the music video to U2's "Stay (Faraway, So Close!)" and inspired Paul van Dyk's 1998 trance music hit, "For an Angel".

"El Ángel" in Mexico City looks a lot like the Berlin victory column.