Madonna and child, in Perugia Cathedral 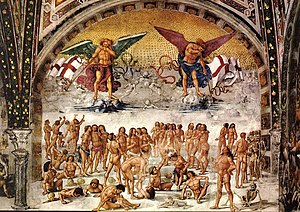 Resurrection of the Flesh, Ovieto Cathedral

Luca Signorelli (probably born in 1441 or 1445, died 16 October 1523) was an Italian painter. He was also called Luca d'Egidio di Ventura and Luca da Cortona. He is one of the most important painters of the Renaissance in Italy. He was good at painting perspective. One of the techniques he used is called foreshortening - with it a distance appears shorter than it actually is, because the object painted is shown at an angle. From 1499 to 1503, he painted a series of frescoes in Orvieto Cathedral, called the Last Judgement. This is what he is remembered for most.