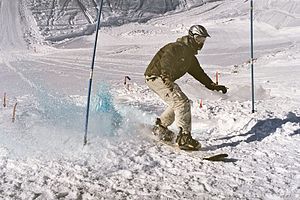 Snowboarding is a sport that is much like skiing. A person stands on a snowboard and rides down a mountain covered with snow. A snowboard is a flat board with bindings that hold your feet in place while gliding down the mountain. It is different from skiing because both feet are on one board - like surfing.

Some snowboarders like to ride over jumps and do tricks.

The snowboard was born in the seventy's through the imagination of several different Americans.

The original idea was born in 1965 through Sherman Poppen. He invented the ‘’snurfer ‘’, which was made of two skis fixed together, as a gift to his daughter. It soon became very popular, so he licensed it to the Brunswick Corporation who sold about a million over the next 10 years.

In the mid 1970s Dimitrije Milovich created a snowboard inspired by the surfing board called the 'Winterstick'. Finally, in 1977 Jake Burton Carpenter helped by Tom Sims and Chuck Barfoot created the first snowboard model, which made them very rich.

During the eighty's, the sport became very popular. In 1982 the first National Snowboard race was held in Vermont at Suicide Six. The number of windsurfering and snowboarding stations grew very fast everywhere there was snow and mountains.

Snowboarding was first recommended to join the Olympic program in 1996 by the Olympic council in Atlanta. Two years later, some competitions like the Big slalom and the Half-pipe took place in The Olympic Nagano games.[1]

Snowboarders must wear hot and good quality clothes against the cold temperature. They wear also some ski goggles to protect their eyes from reflection of the sun on the snow, against the snow and the wind that can be very hurtful. It is essential to have a good view during the ride. The board that they used has to be fitted by squares on all its length that allow snowboarders to practice this sport even if there is not a lot of snow. Also, the snowboard is equipped with binding to provide snowboarders solidity and stability. The security attach have to be firmly tied on the binding and clip on one of your boots adapted to this sport. Wearing a helmet is strongly recommended.[2]

There are two possible positions on the board. First of all, there is the regular one. With this position, your right foot is placed in the back. The second one is called goofy where you have to put your left foot in the back. The choice between those two positions is personal to everyone. Contrary to what everybody can thinks, goofys are not necessary left-handed or regulars right-handed. In fact, seventy-five percent of the people are regulars. Because the board make a curve in the front and in the back, it can glide on the two sides. In addition, the board called twin-tips is perfectly symmetric, so it allows windsurfers to glide in switch (when the favorite foot is in the back) or in normal-foot (when the favorite foot is in the front).