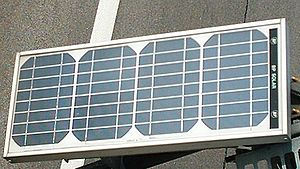 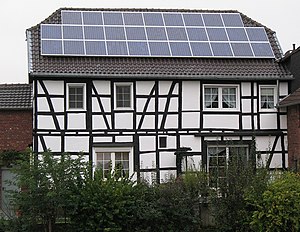 As far as a single solar panel can produce just limited amount of power, many installations contain several panels. This is known as a photovoltaic array. A photovoltaic installation typically includes an array of solar panels, an inverter, rechargeable batteries (for use at night), a charge controller (a device that prevents the batteries from over-charging), two GFCI circuit breakers (one before the inverter and one after), and interconnection wiring. There is sometimes also a transformer after the inverter, which allows 240 volt split phase appliances (such as a clothes dryer or oven) to be used (the transformer is often part of the inverter and can't be seen). Everything past the inverter (or transformer if there is one) is set up like a normal utility-fed installation (breaker panel, lights, outlets, switches, etc.). If there is no transformer, only 120 volt devices may be used. Installations without a transformer must be labelled as such on the breaker panel to alert future electricians that 240 volt appliances can not be installed. Some installations have direct current (DC) lighting and possibly DC appliances. The advantage of this is that for DC loads, the losses in the inverter are avoided. These installations will have a separate DC breaker panel connected before the inverter. For safety reasons, DC wiring cannot be run in the same conduit as AC wiring, and DC outlets must not accept an AC plug and vice versa.

Photovoltaic solar panels come in many different voltages. The most common are 12 volts, 24 volts, and 48 volts. Like batteries, multiple solar panels can be connected together to produce higher voltages, for example, two 48 volt panels connected together would produce 96 volts. The inverter, batteries, and solar panels in a system are usually all of the same voltage. The advantage of a higher-voltage system is that thinner wire is used, which is less expensive and easier to pull through conduit. The disadvantage of a higher-voltage installation is that electric shock and arc flash become more of a hazard, so installations above 48 volts are usually only found in solar power plants or commercial buildings.

Solar panels for heat are usually made from a box with a clear window on top. Pipes run through the box. The pipes and the box are usually painted black because black absorbs more heat than other colors. The pipes are filled with a heat transfer fluid such as water or oil. A pump circulates the fluid, which heats up as it is exposed to the sun. When the hot fluid leaves the panel, it goes into a heat exchanger, which transfers the heat into water or air. After the now cool fluid leaves the heat exchanger, it is pumped back up into the panel to collect heat again.