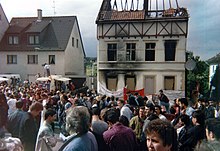 People protest outside the house in Solingen
The Solingen arson attack of 1993 happened on the night of 29 May 1993 when five Turkish people died in Solingen, Germany.[1] They died when four young German men, belonging to the political far right,[2] firebombed a house.[1] The dead were women and children, aged four, nine, 12, 18 and 27, all of whom who were related.[1][2]

The attack caused many protests in Germany, and many German government officials were at a memorial service for the dead.[1] Some of the protests were violent, but others were peaceful.[1][2]

Because of the attack, Germany decided to make sure fewer people from other countries came into Germany for political asylum.[2] It also banned some right-wing political groups.[2]

On 14 October 1995, a German court sentenced the four people who did the attack. Three men, aged 18, 19 and 22, were given prison terms of ten years.[2] The fourth man, 25, was given a term of 15 years.[2] The sentences were opposed by the men and their families, though most of the Turkish people in Germany approved of them.[2] Some Turkish people wanted the men to get life terms in jail.[2]