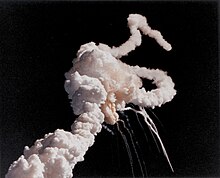 The Challenger explodes during takeoff in 1986

Space Shuttle Challenger (OV-099) was the second space shuttle used by NASA to fly into outer space. The shuttle broke up 73 seconds after take-off from Cape Canaveral on 28 January 1986.[1] All seven astronauts who were on it at the time were killed. The crash happened because a rubber tube called an o-ring did not expand to fill a gap in one of the booster rockets, due to cold weather.

The Challenger was named after a Royal Navy ship that explored the Pacific and Atlantic Oceans from 1872 to 1876. Challenger was also the name of the Apollo 17 Lunar Excursion Module. 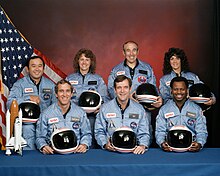