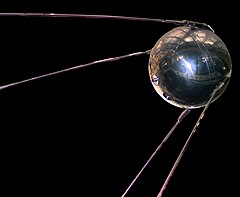 A model of Sputnik 1

The Sputnik programme was a Soviet Union spacecraft programme.[1] Sputnik 1, the first satellite in the programme, was launched on October 4, 1957.[1] This was the first man-made satellite ever to enter orbit.[1]