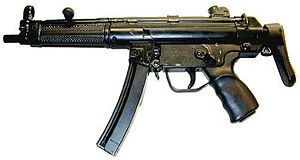 The Heckler & Koch MP5 submachine gun: a favourite with law enforcement and the military.

An MP-40 submachine gun: about a million were made in WWII

In the early 20th century, experiments were made by converting pistols from semi to fully automatic firearms. Stocked (with handle) automatic weapons firing pistol rounds were developed around the same time during World War I, by Italy, Germany, and the United States. The first dedicated designs were developed in the latter stages of World War I both as improvements on earlier stocked pistols, and to offer an advantage in trench warfare.

They were popularized in the 1920s and '30s as weapon of choice of American gangsters and police, in the form of the famous Thompson submachine gun, commonly referred to as the "Tommy Gun". Submachine guns rose to prominence as a frontline close-quarters combat weapon and commando firearm during World War II. They are now widely used by police[2] SWAT, military commando, paramilitary, and counter-terror team members for a variety of situations.

Submachine guns are highly effective in close quarters; their lower-powered pistol cartridges make them generally more controllable in fully-automatic fire compared to assault rifles, while their small size and light weight grant maneuverability. However, pistol bullets often are stopped by body armor or cover, and are short-ranged compared to intermediate and rifle cartridges.

World War II developments were many and interesting. In Germany the development of machine carbines (Maschinenkarabiner) was notable. From 1939 onwards the German Army analyzed combat conditions and developed new tactics and equipment requirements.[3] The existing 7.92x57mm rifle cartridge was more powerful and long ranged than needed. Most combat took place at ranges less than 400 m (440 yards). A less powerful round (bullet) could be used. This meant a soldier could carry more ammunition, the weapon could be shorter, lighter and with less recoil. The gun could be an automatic.