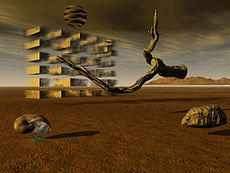 A modern work in the style of surrealism. Objects on a dreamlike landscape. 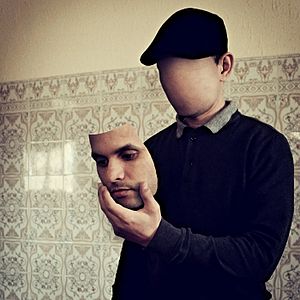 Surrealism was an art and cultural movement which began in the early 1920s.[1]

The name was first used in 1917. Guillaume Apollinaire wrote the program notes for the ballet Parade, which was created for the Ballets Russes of Serge Diaghilev. This was a collaborative work by Jean Cocteau, Erik Satie, Pablo Picasso and Léonide Massine. The program notes ran:

"From this new alliance... there has come about, in Parade, a kind of super-realism ('sur-réalisme'), in which I see the starting point of a series of manifestations of this new spirit".

The movement grew out of Dadaism. This was, amid the horrors of World War I, a protest at the meaninglessness of civilised life.

At the same time, the work of Sigmund Freud began to filter through, and affect the literary and art worlds. André Breton was trained in psychiatry, and during the war, he worked in a hospital where he used Freud's methods on shell-shock patients. Not surprisingly, Breton influenced many writers and artists after the war.

Freud's work placed emphasis on the subconscious mind, and its role in steering behaviour and emotion. His way of using free association, and dream analysis to get a clue to the subconscious was picked up by the surrealists. They painted dreamlike fantasies, and practised automatic drawing without sight: 'automatism'.

In 1924, Breton wrote a Surrealist Manifesto, which defined surrealism as:

"Psychic automatism in its pure state, by which one proposes to express -- verbally, by means of the written word, or in any other manner -- the actual functioning of thought. Dictated by the thought, in the absence of any control exercised by reason, exempt from any aesthetic or moral concern".

Breton discussed his first encounter with the surreal, in a description of a hypnagogic state,[2] in which a strange phrase inexplicably appeared in his mind: There is a man cut in two by the window. This phrase illustrates Breton's view of Surrealism as two distant realities brought together to create a new, uncanny union.

Surrealist works have an element of surprise: unexpected items are placed next to each other for no clear reason. Many Surrealist artists and writers see their work as an expression of the philosophical movement first and foremost. The works are an artifact, and André Breton said that Surrealism was above all a revolutionary movement. From the 1920s in Paris it spread around the globe. It influenced films such as the Angel's Egg and El Topo.

TRANSCENDENTAL SURREALISM Is a new artistic approach, that stands as  the evolution and redefinition of Surrealism in its classical form, as it became internationally known by Andre Bretton's Manifest in the early 20th century. Transcendental Surrealism in Visual Arts, presented in 2018 by the greek visual artist - architect Giorgios (Gio) Vassiliou (b. 1970). It is based on a completely new theory and philosophy that is summarized in  three new foundamental elements, that follow the evolution of ideas, that have emerged so far during the 21st century, in Visual Arts, Psychology, Physics, and the visual perception of the physical world. These three new foundamental elements are: