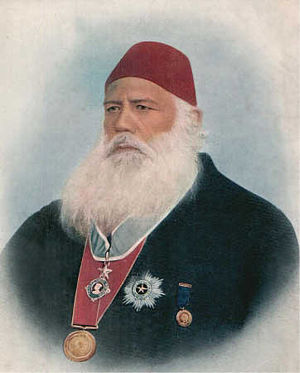 advocacy of the Two-nation theory

Sir Syed Ahmed Khan Bahadur, GCSI (also Sayyid Ahmad Khan)(Urdu: سید احمد خان بہا در; October 17, 1817 – March 27, 1898) was a teacher and politician. He was also a social reformer. He founded the school that would later become Aligarh Muslim University. In 1857 there was a rebellion in India. This is known as the First Indian War of Independence. During this time, Sir Syed kept loyal to the British; He also saved many European lives. After the rebellion he wrote a book where he said the British were in fact those who caused the rebellion.

Sir Syed believed that Muslims were in a bad position in India because of their strong views. India at the time was occupied by the British. It was only in 1947 that it became independent (and two states: India, and Pakistan). Sir Syed therefore introduced the western style of scientific working; and organised Muslim Intellectuals.

He also thought that all Indian Muslims should use Urdu to talk to each other.

He was unhappy about the position of Muslims in India as their social and economic status was declining. According to Sir Syed, Muslims had to bring a positive approach to the British and accept their ways of education. He wanted the Muslims to benefit from the British. To achieve this task he had to bring about cooperation between the Muslims and the British. To do this he did the following things:

Sir Syed also increased the political awareness of Muslims in the Sub-continent. At first he believed in Hindu-Muslim unity but later resolved to the two-nation theory. in 1885 the Indian national congress was set up and it claimed to be the body of every Indian regardless of religion. However it later proved to be functioning only for the Hindus and tried to eradicate the Muslims. The Congress made three demands:

Sir Syed Ahmed Khan played a vital role in improving the Muslim status. He worked tirelessly to restore relatiojns between the Muslims and the British. He brought the Muslim revival through the Aligarh movement and showed the importance of education. He brought about the Two-nation theory and is hence known as "The Father of The Pakistan Movement"