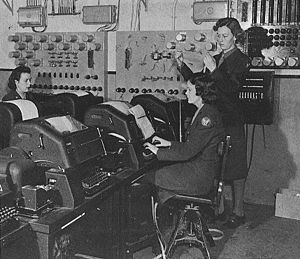 A teletypewriter (TTY; also called a teletype or teleprinter) is a device that sends a typed message to another place. A teletypewriter has a typewriter keyboard, a local printer (so the user can see what has been typed) and a transmitter. Messages can be sent over wires or radio waves. Teletypes were used mostly in the early to mid-20th century. They were developed to improve telegraphs, some of which also used keyboards, though not typewriter keyboards.

Though teleprinters have been by other technologies, TDDs (Telecommunications Devices for the Deaf), which are based on the idea and design of teletypes, are still used these days. People who are deaf, hard of hearing, or speech-impaired use the telephone to communicate. TDD allows them to type messages back and forth to one another, similar to texting, instead of talking and listening.