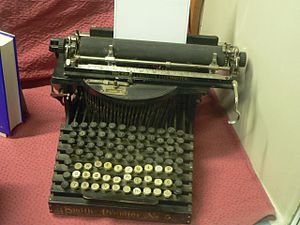 A typewriter is a machine. People used it to type letters and books. Early ones, and later cheap ones, were "manual" typewriters, powered entirely by the user. After the middle 20th century electric typewriters, powered by a motor, became commonplace. Nowadays people use a computer and a printer for the same thing.

In the early days of the typewriter, up to the early 1900s, people said that the person typing the letters was a typewriter. Those people became later known as typists.