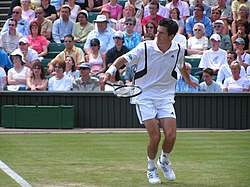 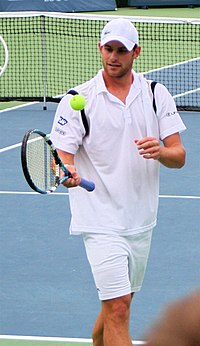 Tennis is a sport played with a felt-covered rubber ball, a tennis racket, and a court. Since 1998, every September 23 has been called "Tennis Day". Tennis’s official name is "lawn tennis".

First, early in the 11th century, players in France played a sport like this with their hands. It was called “Jeu de Paume”. In the 15th century the players played with rackets. Now it is called “tennis”. It became popular in England and France. King Henry III of France was a big fan of the game. This kind of sport is still played but is known as real tennis ("real" here meaning "royal"). The sport of "lawn tennis" played on grass courts was invented in mid 19th-century England and later spread into many other countries.[1][2] The name of the sport is usually shortened to "tennis".

A tennis game has a number of sets. Each set has a number of games, and each game has points. The points are counted love (0, after the French l'oeuf), fifteen (15), thirty (30), and forty (40). If both players get to forty, the score is deuce from which 2 more points are needed to win the game. When one player reaches six games, it is one set. If it is a three-set match, the player who wins two sets first is the winner. If the game count reaches 5–5, the set must be won with two more games than the other player, like 7–5 or 8–6. If the game count gets to 6–6, a "tiebreaker" is played. In a tiebreak, players have to get at least seven points while getting two more points than the other player to win the set. In tiebreak points are called “one,” “two,” etc.

There are many different "shots" and "strokes", ways to hit the ball, in tennis. A stroke is the way the body is moved to hit the ball. A shot is how the ball is hit. These include:

Tennis is now a sport that is played at the Olympics. They also have big tournaments like the U.S. Open, Australian Open, French Open and Wimbledon. These four are known as Grand Slam events.

Winning all four Grand Slams in the same year is called a Calendar Slam. They are the most important tennis tournaments of each season (year). This is because of the world ranking points, tradition, prize-money, and public attention.