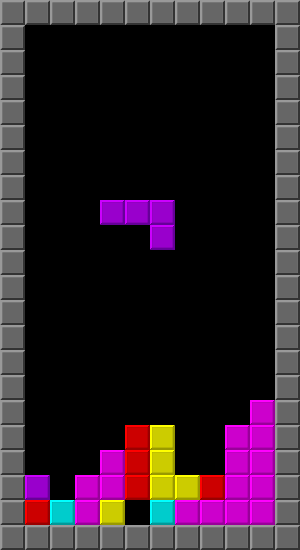 Tetris is a video game developed in the Soviet Union in 1984. The game has a simple goal of destroying lines of block before it reaches the top. The line is made up of a square block. Tetrominoes is the shape of the 4 connected blocks that falls vertically down.[1] The player will have to use the tetrominos to create lines that fill the box horizontally, this will clear the lines of blocks. The game continues, the lines of blocks that is not completely filled will drop down as many lines that were cleared. The game has levels of difficulties which rises as the game is being played.

Tetris has appeared in many video game systems. It has become very common from back when Alexey Pajitnov first made it in 1984.[2] With over 170 million copies sold, it is the 2nd best-selling video game of all time.[3]

The seven types of tetrominoes

The goal is to drop blocks, called tetrominoes, down into a playing field to make lines. Tetriminoes are made of four connected squares each [1] There are seven different types of tetrominoes.[1] Levels have a set goal, or number of lines to clear. When the goal number reaches zero, the player moves to the next level. As the levels go up, the tetrominoes fall faster. A player receives bonus points if he can clear more than one line with a single tetromino. Clearing four lines is called a "tetris", three lines a "triple" and two lines a "double".[4] Clearing two tetrises in a row is called a back-to-back tetris. The player can also turn a T-shaped tetromino into a hole, called a T-slot, to get more points.[5] This move is called a "T-spin". A player loses when the tetrominoes make it to the top of the playing field. See "Issues" for information on the Level 29 Problem.[6]

On the Game Boy, there are several musical themes played. The theme for level 1 and used in the Game Boy version is often called the "Tetris Theme". It is actually a Russian dance called Korobeiniki, or "The Peddlers." Other themes include music by Johann Sebastian Bach and the Dance of the Sugar Plum Fairy.

When you reach Level 28 on the GBA(Game Boy Advance) or NES(Nintendo Entertainment System), the pieces will start falling so fast that the player can hardly move the tetrominoes at all. This means that those pieces will all pile up on the playfield and cause the player to lose.[7]