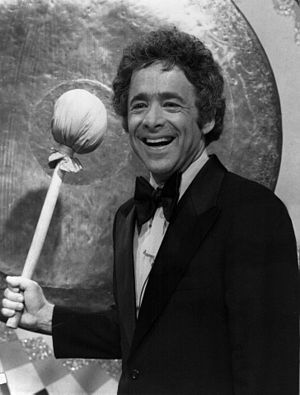 The Gong Show is an American television game show, that was produced in the late 1970s and early 1980s. It was created and hosted by Chuck Barris. The show's name came from a used to shorten performances that were not liked. The gong was sounded by celebrity judges, who rated the performers.

In the mid-1970s, Barris hoped to make a new kind of game show, based on the old "amateur hour" contest shows. He held auditions to find talented acts to appear. Nearly all the performers who came to the auditions were ordinary people, who had one or two skills, or thought they had special talent. Many of the performances were "", that people did to amuse others. Others were more serious, and tried hard to perform well.

Most of the acts made Barris and his staff laugh. They thought their idea for a show would not work, because of the strange and funny performances. Barris then realized that audiences might want to watch them for amusement. He and his staff began to look for funny and unusual acts. The show debuted in 1976, and became a hit.

Two versions of The Gong Show aired at first: A nighttime version, hosted by Gary Owens, and a daytime version, hosted by Barris himself. Barris later took over the nighttime version also. Each version worked the same, but featured different judges and performers. A live band played music for the performances. Live audiences attended each show, and cheered on the acts they liked. When they did not like an act, they would call on the judges to "Gong 'em!" If a judge sounded the gong, the act had to stop, and lost their chance for a prize. The performer who rated highest with the judges won a cash prize. (The "prize" was mostly for show; all the performers were paid the same, whether they won or not.)

Many celebrities served as judges on the show, including Jaye P. Morgan and Jamie Farr. One well-known comedian, Murray Langston, performed on the show with a paper bag over his head. He called himself the "Unknown Comic", and told simple jokes when he appeared onstage. Langston won his round, and was invited back to appear other times. Many people wondered who the Unknown Comic really was. Langston later admitted he had appeared on the show just for some quick cash, because he needed money. He hid his identity so his performance would not hurt his comedy career, since he was already well-known.

No real stars were made by Gong Show appearances, but thousands of people got a chance to perform on national television, and others got the chance to watch. One popular member of the show's cast was "Gene, Gene, the Dancing Machine", who would dance in front of the show's band between acts. Barris himself was also well-liked by the audience. He treated all the performers on the show kindly and seriously, and hosted the show like it was a party.

Many of the acts who auditioned for The Gong Show were not suitable for television, or for times when children or families might watch. Some of these acts appeared in a movie, which was released in 1980.

In time, new and unusual acts became hard to find, as more people performed on The Gong Show. The television audience also lost interest. Barris was tired from working on the show. The Gong Show was cancelled by 1982. Reruns came later, but they also stopped with time.

Today, The Gong Show is remembered fondly by the people who watched it. Amateur talent contests still sometimes feature a gong, for when an act does not go over well. (They are rarely used.)

Barris wrote a , titled Confessions of a Dangerous Mind, that talked about his time on the show.[[Category:First run syndicated television programs