Tiktaalik is a genus of extinct fish. This sarcopterygian (lobe-finned) fish from the later Devonian has many features similar to those of tetrapods (four-legged animals).[1]

This, and other species like it, prove that legs started to develop before these animals were land-based. They were shallow-water carnivorous fish, or fishapods.[3][4] Tiktaalik was therefore a transitional fossil, and an example of mosaic evolution. 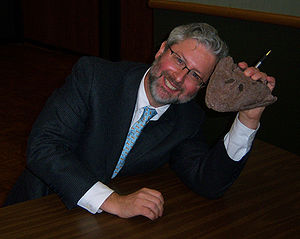 Neil Shubin, co-discoverer of Tiktaalik, holding a cast of its skull