A display of Roman toys, including several that would be familiar to children today: a doll, dice, rattles, and toy dishes for playing house 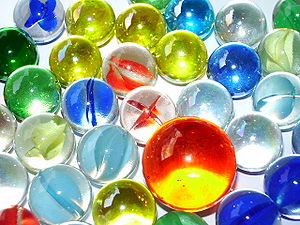 Marbles are a type of toy.
A toy is something to play with. Toys are for children, adults, and animals. Before 1970, most toys were made of metal and wood. Now, they are mostly made of plastic. Sometimes they are made of electronic material. Some people also consider video games toys. Toys include balls, plastic cars, and dolls. 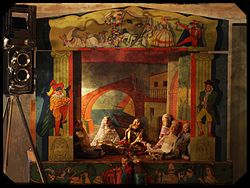 A little theatre with marionettes, Italy, 1959

Toys originated many years ago. Dolls of infants, animals, and soldiers and toy tools are found in archaeological places. The origin of the word "toy" is not known. However, it is thought that it was first used in the 14th century.[1]

The earliest toys were made from rocks, sticks or clay. In Ancient Egypt, children played with dolls made of clay and sticks.[2] In Ancient Greece and Ancient Rome, children played with dolls made of wax or terracotta, sticks, bows and arrows, and yo-yos. When Greek children, especially girls became adults, it was required to sacrifice the toys to the gods. On the eve of their wedding, young girls around fourteen would offer their dolls in a temple as a rite of passage into adulthood.[3][4]

Most Popular Toys by Year