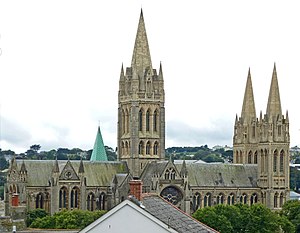 Truro is the capital of Cornwall in South West England. It is the only city in Cornwall, and it is the most southerly city in the British Isles. The River Truro flows though Truro and boats can travel to Truro along the river.

Truro became a large town in the 19th century because of the tin mining industry of west Cornwall. When a new Church of England diocese for Cornwall was set up in 1876 Truro became the seat of the bishop. Truro Cathedral took many years to build but was finished in 1910. It is built in the Early English Gothic revival style. Truro also became the county town of Cornwall when a county council was set up in 1888. The Royal Cornwall Museum is Cornwall's county museum and is owned by the Royal Institution of Cornwall (founded 1818).

The Royal Cornwall Hospital is a major NHS hospital.