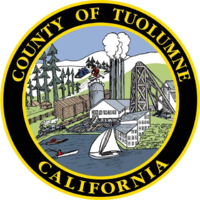 Tuolumne County (/tˈɒləmi/), officially the County of Tuolumne, is a county in the U.S. state of California. As of the 2010 census, the population was 54,179.[1] The county seat and only incorporated city is Sonora.[2] The county is in the Sierra Nevada region.

The northern half of Yosemite National Park is in the eastern part of this county.

Tuolumne County was founded in 1850.