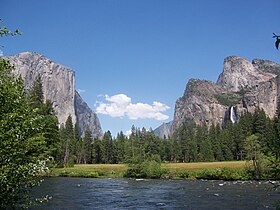 A view of Yosemite Valley from the Merced River, a tributary of the San Joaquin River

Half Dome as viewed from Glacier Point, Yosemite National Park

Gaylor Lakes, in the Yosemite

Yosemite National Park is a national park in the state of California, U.S.A.. Created on 1 October 1890, it was the second national park, after Yellowstone. It is a UNESCO World Heritage Site.[1] Yosemite covers 1,189 square miles (3,081 square kilometers) on the Sierra Nevada.

Over 3.5 million people visit the park each year.[2] Despite the park's great size, most people spend time in Yosemite Valley, one of the most beautiful places in the park. Almost 95 percent of the park is wilderness. Yosemite has many waterfalls. The most famous of these is the world-famous Yosemite Falls, which at 2,425 feet (739 m) tall, is one of the tallest waterfalls in the world.[3]

In the northern area of the park lies the Hetch Hetchy Reservoir, a debated dam project. The reservoir floods. Many people supporting environmentalism are trying to get the dam removed.[4]