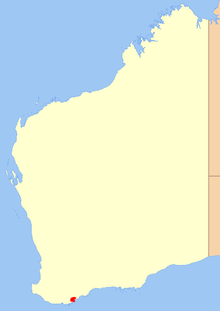 The Two People's Bay Nature Reserve is a small nature reserve on the south west coast of Western Australia. It is where Gilbert's Potoroo, one of the world's rarest mammals can be found. A bird species thought to have been extinct was also rediscovered at Two Peoples Bay. The area was made a reserve in 1967.[1]