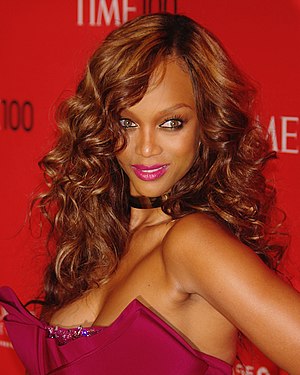 Tyra Banks (born December 4, 1973 in Inglewood, California) is an American supermodel and actress. She is hosts her television programs, America's Next Top Model and The Tyra Banks Show.

Tyra is 5'11" tall. She is the CEO of her own company, TYInc. She was the first African American model to appear on the cover of Sports Illustrated Swimsuit Edition. Tyra is the "Youth Correspondent" for the Oprah Winfrey Show. She signed a modeling contract with the Elite Agency when she was 15 years old. Before she signed, Tyra planned on attending Loyola Marymount University.