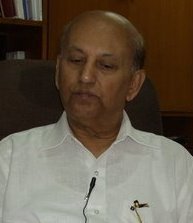 Udupi Ramachandra Rao, popularly known as U. R. Rao[1] (10 March 1932 – 24 July 2017) was a Indian space scientist. He served as Chairman of the Indian Space Research Organisation from 1984 through 1994. He was the Chairman of the Governing Council of the Physical Research Laboratory at Ahmedabad and Nehru Planetarium at Bengaluru and Chancellor of Indian Institute for Space Science and Technology (IIST) at Thiruvananthapuram. He was born in Adamaru, Karnataka.