Map of the former Japanese provinces with Ugo highlighted 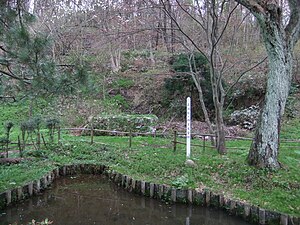 Marker honoring wife of Satake Yosinobu, whose descendants were daimyo in the province

During the Edo period and early Meiji period, the Satake clan were daimyo in the area.[4]

In the Meiji period, the provinces of Japan were converted into prefectures. Maps of Japan and Ugo Province were reformed in the 1870s.[5]