Union for a Popular Movement

The Union for a Popular Movement (French: Union pour un Mouvement Populaire, UMP), was the main French centre-right political party. It was formed in 2002. On 30 May 2015, it was replaced by The Republicans.

Since the 1980s, the political groups of the parliamentary right joined forces around the values of economic liberalism and the building of Europe. Their rivalries had contributed to their 1981 and 1988 electoral defeats. Therefore, some politicians were in favour of the formation of a confederation, a party.

UMP was founded from the merger of the Gaullist-conservative Rally for the Republic (Rassemblement pour la République, RPR), the conservative-liberal Liberal Democracy (Démocratie Libérale, DL), and a part of the centrist Union for French Democracy (Union pour la Démocratie Française, UDF). Many Christian Democrats (such as Philippe Douste-Blazy and Jacques Barrot), the social-liberal Radical Party and the centrist Popular Party for French Democracy (both associate parties to UDF until 2002) joined the party.

The party was thus born out of the meeting of four major French political traditions: Gaullism, Liberalism (Republicanism), Christian Democracy (Popularism) and Radicalism.

The UMP generally supported the policies of President Jacques Chirac. However, in 2004, the party showed increasing signs of independence. The unpopularity with the electorate of Jacques Chirac and Jean-Pierre Raffarin's government led most members of the UMP to support Nicolas Sarkozy, a rival of Chirac. The party also publicly disapproved of Turkey's proposed membership in the European Union, which Chirac was in favour of.

The first president of the UMP, Alain Juppé, a close associate of Jacques Chirac, resigned on 15 July 2004. On 29 November 2004, Nicolas Sarkozy announced that he would officially take over the presidency of the UMP.

In the 2004 French regional elections the UMP suffered a heavy blow, securing only 2 out of 22 regions in Metropolitan France and half of the departments. This led to the fall of the Jean-Pierre Raffarin government (2001-04), and to the formation of a new cabinet, presided by another UMP politician, Dominique de Villepin. 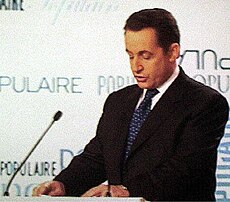